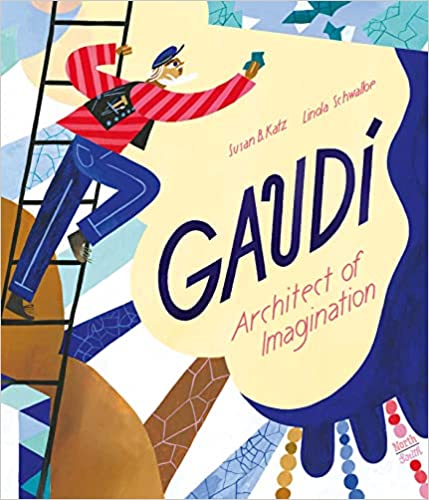 Your dreams can change the world!

Colorful mosaics, playful flowing forms, imaginative facades—Barcelona shines with the buildings of Antoni Gaudí. How did the son of a Catalan blacksmith become a world-famous architect? The first years of Gaudí's life were challenging. Because of an illness, young Gaudí couldn’t attend school and was often alone. Many of his days were spent out in nature, which he would later call his great teacher. Even during his training as an architect in Barcelona, his teachers were puzzled, wondering: is he a “genius or a fool?” Many considered his unusual ideas eccentric, sometimes even crazy. But Gaudí was simply ahead of his time. His buildings are now a UNESCO (United Nations Educational, Scientific and Cultural Organization) World Heritage Site.

With an insightful eye into the world of an inspired genius, award-winning author Susan B. Katz tells of Gaudí's life and work. Linda Schwalbe's dazzling and powerful illustrations reflect the inventive, daring, and flamboyant style of Gaudí's work.

Order on Amazon
Order on Barnes&Noble
Scroll To Top